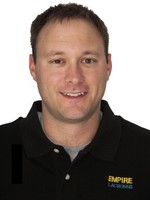 Coach Thompson just completed his eleventh year as the head coach of Providence Day School. Since taking over the program in 2005, the Chargers have amassed a record of 175-61, reaching the playoffs in each of those eleven seasons. He has guided PDS to five conference championships along with five trips to the state championship game, capturing PDS’s first ever championship in 2007. Along with the state title, he was awarded NCISAA coach of the year in 2007.  Over his tenure, he has coached 41 All-State selections and 11 All-Americans.  Coach Thompson also serves as the Sixth Grade Dean and history teacher at PDS.

Prior to taking over the varsity position at PD, he coached the JV team for two years and served as an assistant varsity coach at Charlotte Latin from 2000-2002. Throughout the summer he is heavily involved in the lacrosse community. He is a co-director of Empire Lacrosse, a group that runs both day and overnight camps. Additionally, he has serves as the youth director for the Team Carolina Lacrosse Club.

Head Coach - Ardrey Kell HS. Coach Price founded the lacrosse program at Ardrey Kell High School where he is an English IV instructor. During his time in Charlotte, Price led Charlotte Latin for three seasons and served as an assistant at Providence Day for two seasons. In 2006, Price was named the NCISAA Lacrosse Man of the Year for his service on and off of the field. Additionally, Price has devoted his summers to coaching lacrosse with Team Carolina, Team Charlotte and numerous summer camps. Price has coached at the under 17, 15, and 11 levels while with Team Charlotte. In 2005, he led Team Carolina to a 12-5 record against national competition during their inaugural summer. In 2006, under Price's direction Team Carolina finished 11-3 including a #5 ranking at the nationally recognized recruiting tournament Champ Camp in Baltimore, Maryland. While with Team Carolina, Price has compiled a record of 35-10.

Prior to his arrival in Charlotte, Price served six seasons at Quinnipiac University in Hamden, Connecticut. After two seasons as an assistant coach, Price was named as Head Coach in 1997 and placed in charge of guiding Quinnipiac from Division II status to Division I. At the time of Quinnipiac’s elevation to Division I, Price was the youngest NCAA Division I head lacrosse coach. In 1999 Quinnipiac posted an 8-7 record in their first season of Division I. Price’s squad tied for second place in the Metro Atlantic Athletic Conference after being picked to finish last. In 2001 Quinnipiac cruised to a 13-0 record before finishing the season 14-2. Quinnipiac went 9-0 to win the MAAC regular season title outright earning Price MAAC Coach of the Year honors. In 2002, Price engineered the most potent offense in Division I, averaging nearly 17 goals a game.

Tim Price is a 1995 graduate of Ithaca College in Ithaca, New York. As a player Price was a four-year letterman at Division III power Ithaca College. While at Ithaca, the Bombers visited the NCAA semi-finals and won an ECAC Upstate Championship. A native of Long Island, Price now resides in Matthews, North Carolina with his wife Angela, son Jackson and daughter Mia.